The Palace of Versailles

The Palace of Versailles is an INCREDIBLE place. 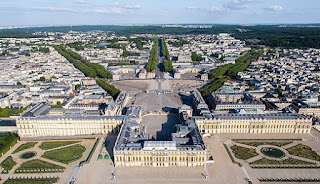 It is just outside Paris, France... it only takes about 30 minutes to get to by train.

It was built in the mid to late 1600s mainly by the French king Louis the 14th, but was actually started before him, and was added to by future kings. 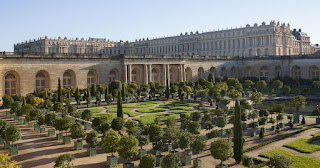 The palace, the other buildings (including a place for the queen and even a set of buildings made to look like a farm where the queen could go to relax and pretend to be an ordinary person!) and the grounds take up almost 20,000 acres.  That is more than Manhattan!  Just the main building has over 700 rooms, and around 5,000 people lived there during the days of the French kings.  Everything about Versailles was big.... the stables themselves held over 2,000 horses.

Here is an old painting of Versailles, showing the fancy lords and ladies walking about. 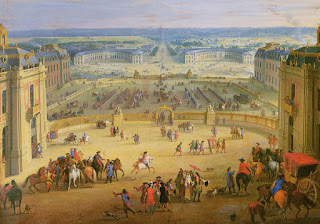 Here is a map of the whole thing. 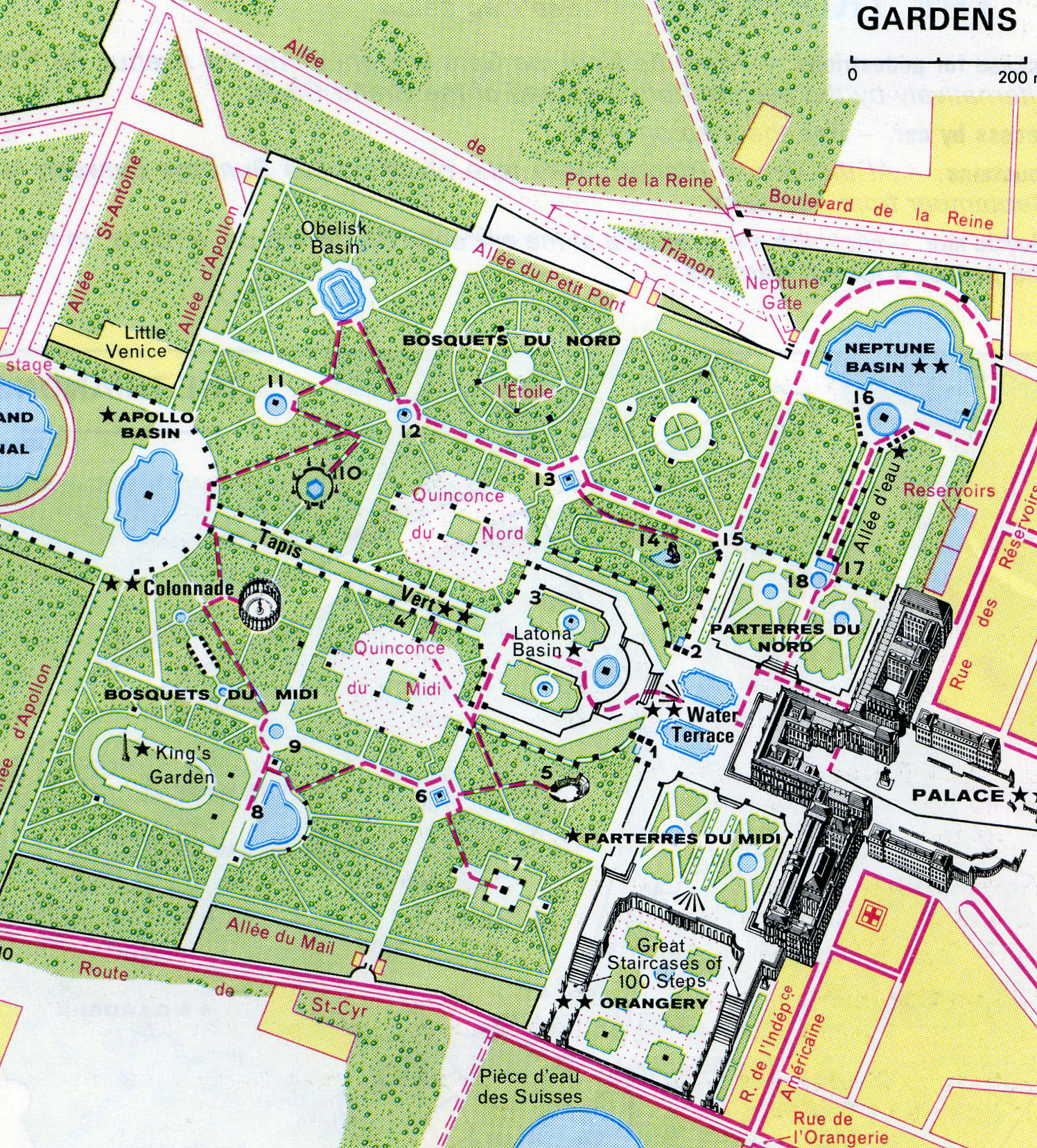 Below is a photo of just the entrance to the main building.  It is so large that you can't really photograph the whole thing! 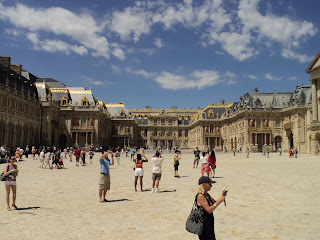 There are a lot of amazing rooms at Versailles.  The most famous is the Hall of Mirrors, where the Treaty of Versailles was signed.  It is 240 feet long, and the ceilings are 40 feet high... that is about four stories tall.

Here is a photo of the signing of the Treaty of Versailles. 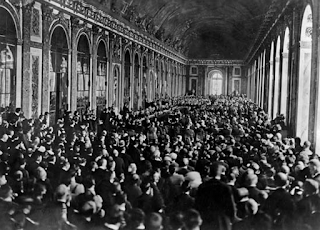 This is another room, that now holds many paintings of famous French battles. 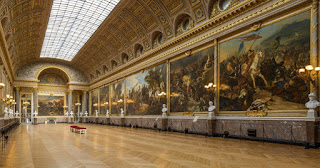 Here is one of the bedrooms.  A lot of the furniture has been moved out, but the bed is still there! 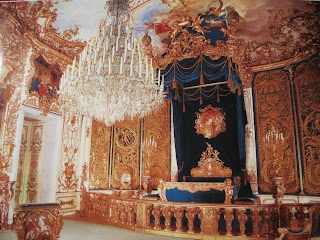 The queen, Marie Antoinette, had nice rooms as well.  Here is her bedroom. 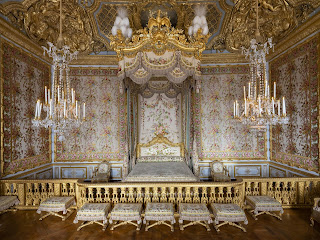 And here is one of her many sitting rooms... 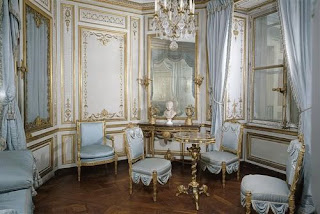 And here is her personal library! 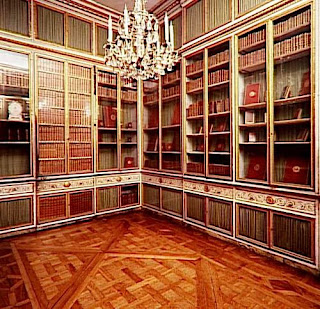 Here is a famous chapel.  The king was very religious and wanted to go to church without leaving home.  Here is a photo of it from the outside. 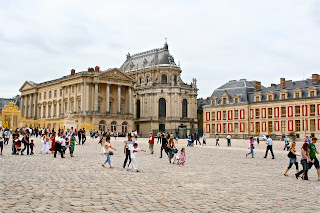 Here is a photo of the INSIDE.  Pretty nice, right? 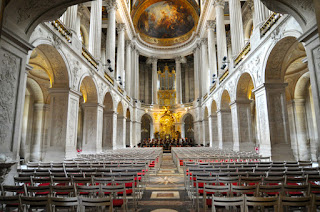 Amazingly, you can actually RENT some of the rooms at Versailles for parties and the like... good luck, of course, because they do NOT come cheap.

Here is the Gallery of Battles, set for a fancy dinner. 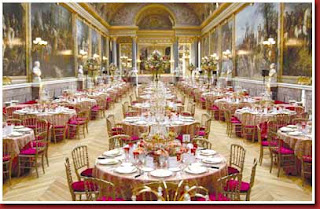 Here is the Crusades room, also set for dinner... 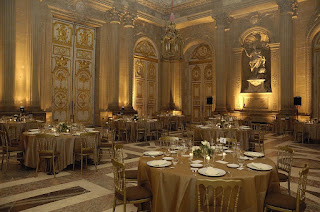 Here is the Cotelle Gallery, which is found in another, smaller palace on the grounds of Versailles. 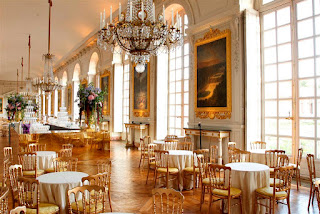 And if you feel like hosting some friends to sing, you could rent the Royal Opera, which is also on the grounds.

Here is an old map of the gardens.  They haven't changed much!

The gardens are one of the most famous pieces of Versailles.  Here is a photo from the back porch.

And here is facing back towards the palace, from the same spot. 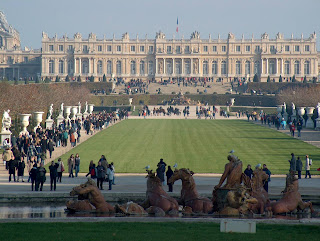 This is the back porch.

Here is one of the side gardens. 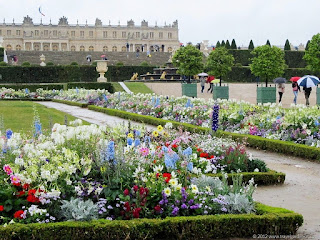 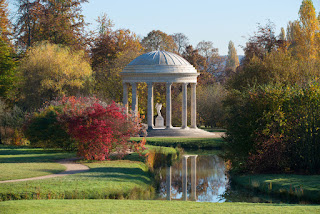 Here is another of the side gardens... there are all styles of gardens, including a maze garden, several carefully manicured gardens, a wild garden, and a bunch of others.


Versailles is VERY famous for its fountains. 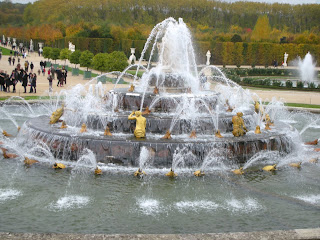 The same one at night... 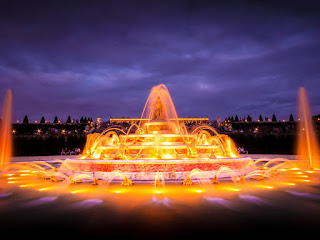 And another, hidden in the maze... 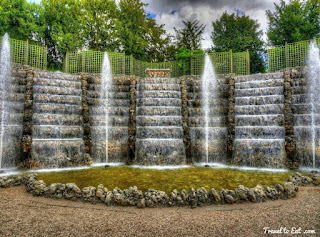 And another... (not turned on...)  The fountains and garden need a LOT of water to stay green and running; for a while Versailles used more water in a day than the whole city of Paris! 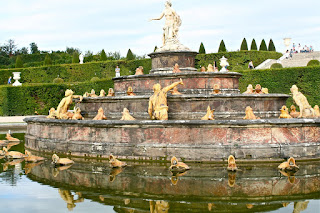